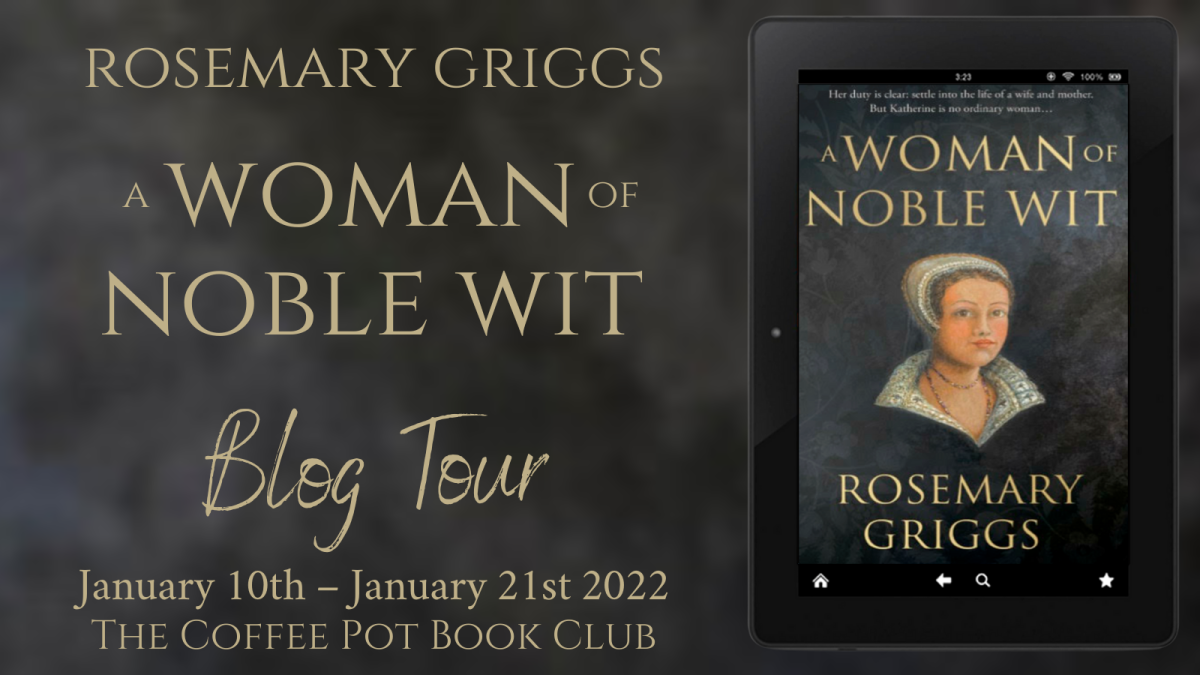 Your book, A Woman of Noble Wit , sounds fascinating. Can you share with me what the first idea was that made you decide to write this story? It might be very different from how the story ended up being, but I am curious, if you don’t mind sharing. And, if the story is very different, would you mind sharing the process by which you ended up with your current novel?

For example, my current book started off after watching an old Pathe TV show about making motorbikes and sidecars and has ended up as a 1940s mystery involving an unidentified body!

Retirement can be a wonderful thing.  If you’re lucky, as I am, it can set you free and give you time to do the things you’ve always wanted to do. Since I retired I’ve been able to indulge a lifelong passion for history and I’ve also been dusting off some long-neglected dressmaking skills. I started to research and make sixteenth century clothing to wear as a volunteer at a local National Trust property. That was where I first met Katherine Champernowne, the subject of my novel.  I now bring this remarkable Devon woman to life for audiences all over the county and use her clothes to open up conversations about how people like her lived.  As I learned how to make her clothes I found it wasn’t enough to just look all right on the outside. I wanted to construct my costumes as accurately as possible, layer by layer,  so that I could feel what it was like to dress as she did — to walk in her shoes.

In the same way, I wanted to understand what it felt like to live through those times as an educated well-born woman far from the Royal Court.  We hear a lot about the lives of King Henry and his Queens, but little about the largely unrecorded, unnoticed women, who stood behind other famous men who changed the course of history. I thought Katherine’s story deserved to be told. That germ of an idea would eventually turn into my novel.

I read every book I could find on the lives of women in sixteenth century England.  I researched Katherine’s family and Devon’s Tudor history.  I spent many happy hours poring over old documents in the archives.  I visited the places she knew. I read biographies of her famous sons, amongst them Sir Humphrey Gilbert and, of course, Sir Walter Raleigh.

Sir Walter was a prodigious writer.  His letters, books and poems reveal a lot about his character. His deeds as Queen Elizabeth’s favourite, as a soldier, sea captain, poet and more, are well recorded. There are even descriptions of him written by his contemporaries.  For Katherine herself and for some of the other people in her life there is much less to go on.

In 1538 Thomas Cromwell was behind a new law that required priests to keep a record of baptisms, marriages and burials.  One of his better ideas, I think.  But key events in Katherine’s early life fell well before the new system started. Record keeping was patchy at first and many registers have been lost or damaged, So tracking down the most  basic details of her life — the exact date of her birth, and of her two marriages —was very difficult.  We do know that she was laid to rest beside her second husband. In a letter Sir Walter wrote to his wife before his execution he said he wanted to be buried beside his parents “in Exeter church”.  It’s believed that Katherine Raleigh died in 1594, shortly after she made her will. But the page that would have recorded her burial is missing from the register of St Mary Major’s in Exeter, though Walter Raleigh senior’s burial is listed there in February 1580/1581. Nor can we read her will as it was originally written.  It was lost in a second world war bombing raid on Exeter in 1942 when the City Library, the repository of over a million documents and books, was completely destroyed.  Only due to the diligence of a nineteenth century scholar do we have a transcript of her last wishes.   We do, however, have an account of her courageous vigil in the prison cells beneath Exeter Castle with protestant martyr Agnes Prest. It was published during Katherine’s lifetime in Foxe’s Book of Martyrs, which says that Katherine Raleigh was “a woman of noble wit and godly ways.” That gave me my title.

At first I thought I would write a fully sourced academic biography,  but I found that there were many gaps to fill, many areas of doubt.  Scholars even remain divided about the exact dates of birth of her boys.  My research fixes the birthday of only her eldest Gilbert son, John, with certainty, confirmed in his father’s Inquisition Post Mortem.   For her other children the dates remain uncertain.  Even the number of children she bore is open to question. For example, there may have been a second Gilbert daughter named Elizabeth, others may have died in infancy unrecorded.

I pieced together as much as I could from what was recorded about Katherine’s brothers, sisters, parents and other relatives, some of whom  had close connections to the Court. I recently published a blog post setting out the research that has convinced me that the other Katherine Champernowne, the one  who was known as Kat, later married John Ashley, and was governess to the young princess Elizabeth, was Katherine Raleigh’s sister.

Another sister, Joan wife of Sir Anthony Denny, served several of King Henry’s Queens and is recorded as a close friend of Katryn Parr.  The careers of Katherine’s Carew cousins Sir George, who went down in the Mary Rose, and Sir Peter, feature often in  the record.

Beyond that I started to look for clues from which I could develop plausible explanations for the missing pieces in the jigsaw of Katherine Raleigh’s life.  The personalities of people who played their part in her story started to emerge of their own volition.  I started to put flesh upon the bones of the bare skeleton the historical record had left me.   I felt I was really getting to know Katherine and her world. The more I discovered, the more I wanted to bring her to life; to explore how she might have become the woman who inspired her sons to follow their dreams.  So, my story of Katherine’s life started to evolve and take shape, a story that also did justice to the exciting events that gripped Devon in those turbulent years. Where I have found facts are backed up by reliable source documents I have respected them.  But I have sought to weave those facts together with fiction to create a believable and compelling story of one woman’s life in a changing world.

Few women of her time lived to see their name in print. But Katherine was no ordinary woman. She was Sir Walter Raleigh’s mother. This is her story.

Set against the turbulent background of a Devon rocked by the religious and social changes that shaped Tudor England; a Devon of privateers and pirates; a Devon riven by rebellions and plots, A Woman of Noble Wit tells how Katherine became the woman who would inspire her famous sons to follow their dreams. It is Tudor history seen though a woman’s eyes.

As the daughter of a gentry family with close connections to the glittering court of King Henry VIII, Katherine’s duty is clear. She must put aside her dreams and accept the husband chosen for her. Still a girl, she starts a new life at Greenway Court, overlooking the River Dart, relieved that her husband is not the ageing monster of her nightmares. She settles into the life of a dutiful wife and mother until a chance shipboard encounter with a handsome privateer, turns her world upside down.…..

Years later a courageous act will set Katherine’s name in print and her youngest son will fly high.

Rosemary Griggs is a retired Whitehall Senior Civil Servant with a lifelong passion for history. She is now a speaker on Devon’s sixteenth century history and costume. She leads heritage tours at Dartington Hall, has made regular costumed appearances at National Trust houses and helps local museums bring history to life.

One thought on “I’m delighted to welcome Rosemary Griggs to the blog with a post about her new book, A Woman of Noble Wit”