With the odds stacked against her, Samantha Reynold is determined to prove she’s tough enough to be the boss. But when a secret from the past threatens to ruin Sam’s reputation, she suddenly feels very alone in this dark new world. There’s only one man she can turn to – rival club owner, Sebastian Stoker.

Seb knows first-hand how secrets and lies can tear a family apart. He wants to protect Sam at all costs, but siding with her could threaten his own position as head of the Stoker family and risk accusations of betrayal.

With loyalties divided and two families at war – the fallout could be deadly.

Fallout is my first gangland crime novel. It’s not my usual read – or is it?

Set in Birmingham, in 1995, it’s quite strange to read about a place I once lived quite close to. Mentions of the shops made me chuckle, and I recognised many of the place names, if not all of them.

I thrust myself straight into the book, not realising that it’s the second part of a two part book set (I know, I do this all the time.) That said, I did eventually work out many of the interactions – if I missed a few things, it didn’t impact my enjoyment of the story. And, I did enjoy it. It’s not my usual read – and it is really quite gritty. There is no one in this book that is particularly pleasant – there’s a lot of backstabbing and the plot winds tighter and tighter as it continues. You just know it’s all going to get very nasty in the end. And it does, but not quite as nasty as I feared:)

So, yes, not my usual read, but a story of backstabbing and double-crossing is very similar to the sort of story I like to write, and so the setting might have been different but the plot was like. Overall, I enjoyed my first foray into a touch of gangland, and I will certainly be reading the follow-up.

Edie Baylis is a successful self-published author of dark gritty thrillers with violent background settings. She lives in Worcestershire, has a history of owning daft cars and several motorbikes and is licensed to run a pub. She has signed a five-book deal with Boldwood.

A tale as old as time. A spirit that has never rested.

As a love affair comes to an end, and with it her dreams for her future, artist Selena needs a retreat. The picture-postcard Sloe Cottage in the Somerset village of Ashcombe promises to be the perfect place to forget her problems, and Selena settles into her new home as spring arrives. But it isn’t long before Selena hears the past whispering to her. Sloe Cottage is keeping secrets which refuse to stay hidden.

Grace Cotter longs for nothing more than a husband and family of her own. Content enough with her work on the farm, looking after her father, and learning the secrets of her grandmother Bett’s healing hands, nevertheless Grace still hopes for love. But these are dangerous times for dreamers, and rumours and gossip can be deadly. One mis-move and Grace’s fate looks set…

Separated by three hundred years, two women are drawn together by a home bathed in blood and magic. Grace Cotter’s spirit needs to rest, and only Selena can help her now.

The Witch’s Tree is my second dual timeline novel in a week. It’s not my preferred take on historical fiction, but hey, I’m on holiday, so why not.

A captivating read, I think readers will enjoy meeting Grace and Selena.

My thanks to Netgalley and the publisher for my review copy.

(Not one to ever think that books should come with trigger warnings, I confess, there was one aspect of the book that I found a little upsetting, so I’ll say here that readers should be aware of the appearance in the narrative of a cleft lip. I don’t want to give any spoilers, but just to let readers know it is there.)

The Witches Tree is released today, 17th May 2022, and is available in ebook, paperback, hardback, large print and audio. 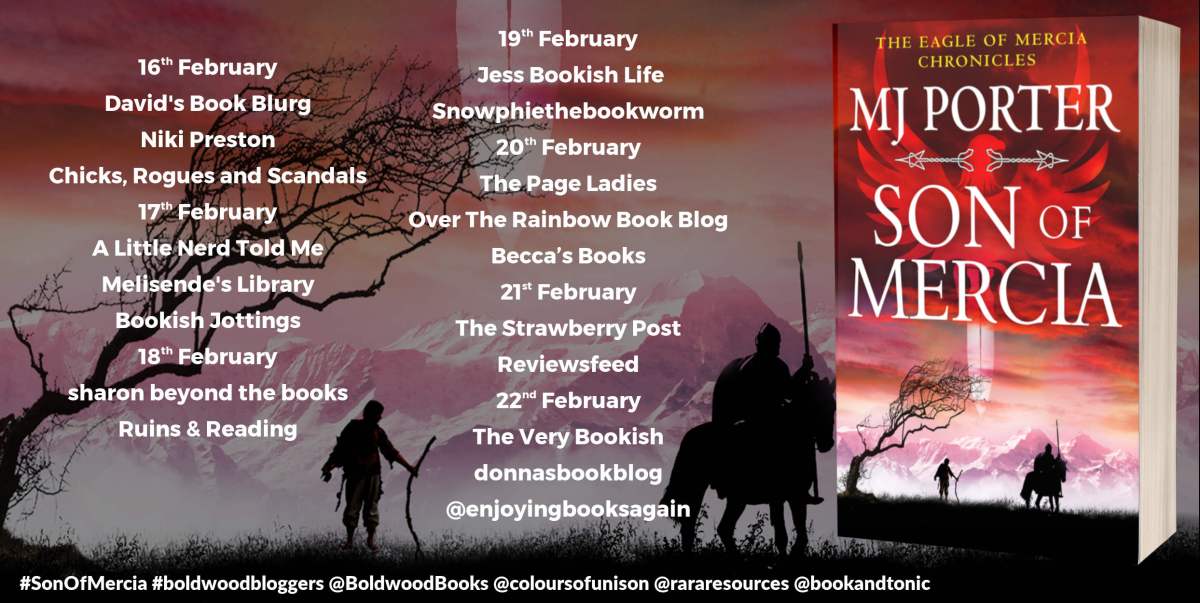 Today is the day. Son of Mercia is FINALLY released (I know it hasn’t actually been that long, it just feels like it).

I’m so excited to share it with fans and new readers alike.

If you’ve not yet heard about my new book (where have you been:)) then here’s the blurb:

The once-mighty kingdom of Mercia is in perilous danger.

Their King, Beornwulf lies dead and years of bitter in-fighting between the nobles, and cross border wars have left Mercia exposed to her enemies.

King Ecgberht of Wessex senses now is the time for his warriors to strike and exact his long-awaited bloody revenge on Mercia.

King Wiglaf, has claimed his right to rule Mercia, but can he unite a disparate Kingdom against the might of Wessex who are braying for blood and land?

Can King Wiglaf keep the dragons at bay or is Mercia doomed to disappear beneath the wings of the Wessex wyvern?

Can anyone save Mercia from destruction?

And what’s so exciting about Son of Mercia is that it’s released in all the formats and over many, many platforms, today. Find the ebook, paperback, hardback, large print and audio version at your retailer of choice via this link.

Join the blog tour for Son of Mercia by following #SonOfMercia on twitter, or check back here, as I will be posting links to the blogs. Thank you to all the bloggers and to Rachel for organising such a fantastic tour to celebrate release week.

To keep up to date with news and information about book 2 in The Eagle of Mercia Chronicles, please sign up to my newsletter or the Boldwood Books newsletter. Thank you. I can confirm that book 2 is already up for preorder on some sites. )I’ll add more links as it appears elsewhere.)

The start of a brand new series from bestselling author MJ Porter.

The once-mighty kingdom of Mercia is in perilous danger.

Their King, Beornwulf lies dead and years of bitter in-fighting between the nobles, and cross border wars have left Mercia exposed to her enemies.

King Ecgberht of Wessex senses now is the time for his warriors to strike and exact his long-awaited bloody revenge on Mercia.

King Wiglaf, has claimed his right to rule Mercia, but can he unite a disparate Kingdom against the might of Wessex who are braying for blood and land?

Can King Wiglaf keep the dragons at bay or is Mercia doomed to disappear beneath the wings of the Wessex wyvern?

Son of Mercia is the start of a brand new series, The Eagle of Mercia Chronicles, and will be released on 16th February 2022. It is available to preorder (universal link), right now, from Amazon, Kobo (where you can read a cheeky preview), Barnes and Noble, Google Play, Apple and Angus & Robertson. It will be available in ebook, paperback, hardback and audio, and also in some book stores. I will add the details closer to release date.

To keep up to date with all things The Eagle of Mercia and Son of Mercia, please sign up to my Boldwood Books Newsletter.

I can’t wait to share my new series with my readers.