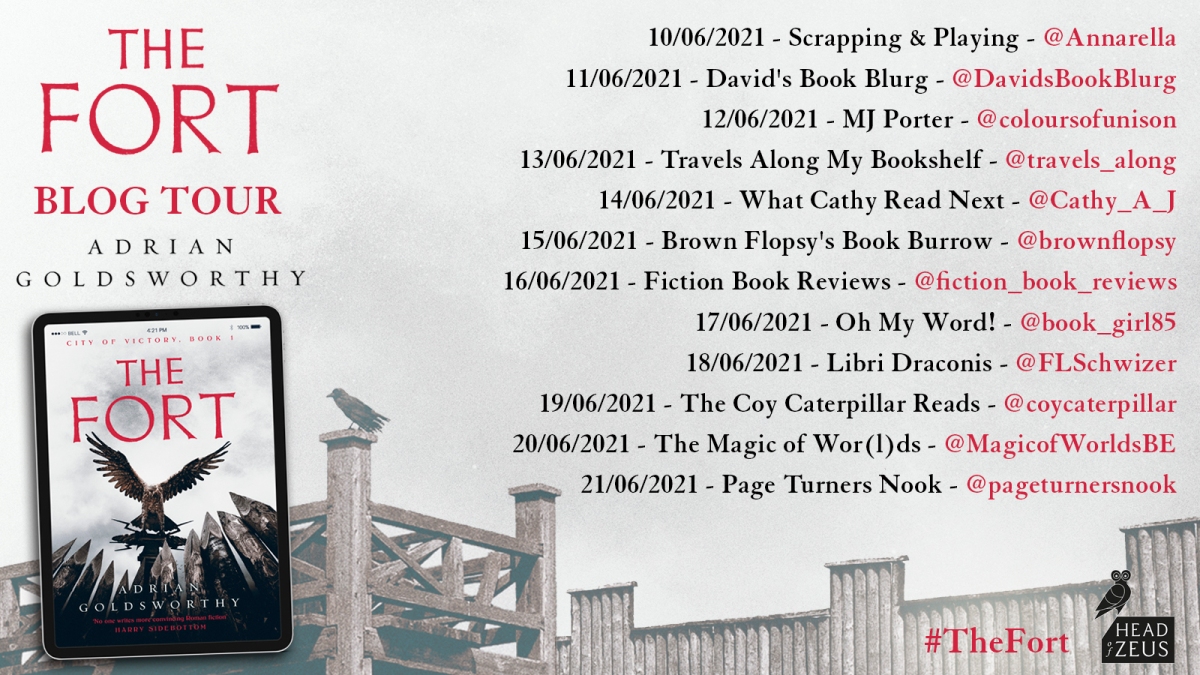 The Dacian kingdom and Rome are at peace, but no one thinks that it will last. Sent to command an isolated fort beyond the Danube, centurion Flavius Ferox can sense that war is coming, but also knows that enemies may be closer to home.

Many of the Brigantes under his command are former rebels and convicts, as likely to kill him as obey an order. And then there is Hadrian, the emperor’s cousin, and a man with plans of his own…

Gritty, gripping and profoundly authentic, The Fort is the first book in a brand new trilogy set in the Roman empire from bestselling historian Adrian Goldsworthy.

The Fort by Adrian Goldsworthy is good ‘Roman’ era fiction.

Set in Dacia in AD105, it is the story of ‘The Fort’ under the command of Flavius Ferox, a character some will know from Goldsworthy’s previous trilogy that began with Vindolanda.

Mistakenly thinking this was an entirely new trilogy with all new characters, it took me a while to get into the story. Everyone seemed to know everyone else apart from me. But Ferox is a good character, and he grounded me to what was happening in the immediate vicinity of the Fort, and apart from once or twice, it didn’t really matter what had gone before.

This is a story of suspicions, ambition and lies, and it rumbles along at a good old pace. This isn’t the story of one battle, but rather many, a slow attrition against the Romans by the Dacians.

Overall, this was an enjoyable novel, and some of the fighting scenes were especially exciting. Those with an interest in Roman war craft will especially enjoy it, although, I confess, I don’t know my spatha from my pilum (there is a glossary, fellow readers, so do not fear.)

Adrian Goldsworthy has a doctorate from Oxford University. His first book, THE ROMAN ARMY AT WAR was recognised by John Keegan as an exceptionally impressive work, original in treatment and impressive in style. He has gone on to write several other books, including THE FALL OF THE WEST, CAESAR, IN THE NAME OF ROME, CANNAE and ROMAN WARFARE, which have sold more than a quarter of a million copies and been translated into more than a dozen languages. A full-time author, he regularly contributes to TV documentaries on Roman themes.

Don’t forget to drop by the other stops on The Fort Blog Tour.

“AD 98: The bustling army base at Vindolanda lies on the northern frontier of Britannia and the entire Roman world. In twenty years’ time, the Emperor Hadrian will build his famous wall, but for now defences are weak, as tribes rebel against Roman rule, and local druids preach the fiery destruction of the invaders.

Flavius Ferox is a Briton and a Roman centurion, given the task of keeping the peace on this wild frontier. But it will take more than just courage to survive life in Roman Britain”

Vindolanda arrived just at a time when my curiosity in all things Roman was starting to quest for something a little closer to home than Rome and Germany (as all the previous Roman era books I’ve read have been based far afield). Living close to Hadrian’s Wall I was delighted to see this title and pounced on it with delight.

The novel starts well enough, and I was quite hooked from the word go but unfortunately, the author’s vast knowledge on the Roman Empire and military matters, in particular, makes the novel far too complex for someone who has only newly come to Roman era historical fiction. I am sure that those who adore Roman historical fiction and non-fiction will revel in the author’s painstaking details of the forces marshalled at Vindolanda and further afield, of the different cohorts and groups of men sent to fight and ensure Rome’s domination, but I struggled to make any sense of what was actually happening unless the action was focused exclusively on Ferox, who I think is supposed to be the hero of the novel but who has a bit of a rough time of it as his character is never allowed to fully develop – he has potential but the author fails to evolve him as he deserved.

I also very much struggled in remembering who all the characters were. Three of the men all have names beginning with C and despite my best efforts, I utterly failed to keep the three of them clear in my mind – often what happened to them told me more about who I was reading about than anything else. There are also a whole host of British tribes to add to the conundrum of who everyone was and while I salute the attempt at authenticity and indeed believe that it should be a part of all historical fiction, I believe that a much better job could have been done of ensuring that the reader knows what’s happening. There were great swathes of conversation where no indication was given as to who was speaking with who. Just a little ,’Ferox spoke” etc would have made the novel far more ‘user-friendly.’

There are a number of fighting/battle scenes that I struggled to fully comprehend, although I imagine others more skilled in Roman military history may fare much better, and these are well spaced throughout the novel. I found it quite surprising how few Romans died in the battles, and also how often the Britons were naked, but perhaps this is historically accurate.

There were elements of the book that flowed very well and others that didn’t. I think with a little work on pacing, and removing all the strange tense changes that occur, this novel could be much more accessible and better received by a whole host of Roman era fans – as it would appear that there is huge interest in this subject. But at the moment – it has the feel of a work in progress and one with more work still to be done. Having just read another historian’s attempt at historical fiction, I feel that on this occasion, Goldsworthy fails to do his subject justice. A shame all round, compounded when I read the notes at the back and realized that the entire story was completely made up. I do like my historical fiction to have some basis in historical fact.