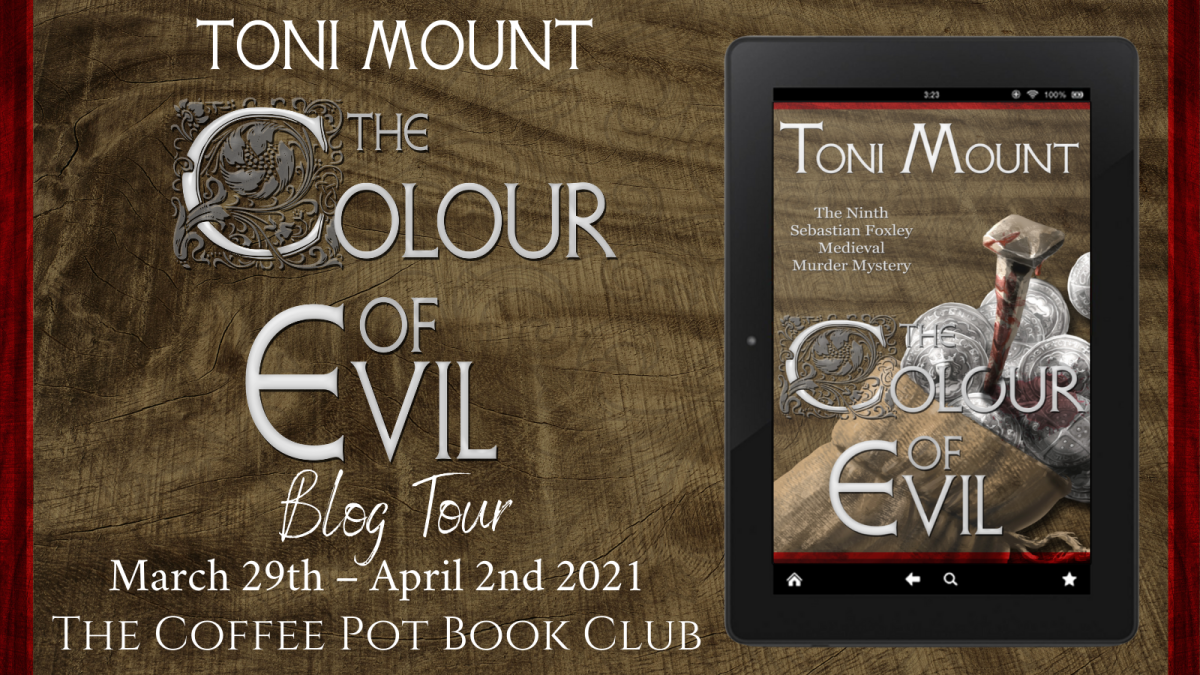 Today I’m delighted to welcome Toni Mount to the blog with an excerpt from her new novel, The Colour of Evil.

Every Londoner has money worries, and talented artist and some-time sleuth, Seb Foxley, is no exception.
When fellow craftsmen with debts to pay are found dead in the most horrid circumstances, fears escalate. Only Seb can solve the puzzles that baffle the authorities. Seb’s wayward elder brother, Jude, returns unannounced from Italy with a child-bride upon his arm. Shock turns to dismay when life becomes more complicated and troubles multiply.
From counterfeit coins to deadly darkness in London’s worst corners. From mysterious thefts to attacks of murderous intent, Seb finds himself embroiled at every turn. With a royal commission to fulfil and heartache to resolve, can our hero win through against the odds? Share Seb Foxley’s latest adventures in the filthy streets of medieval London, join in the Midsummer festivities and meet his fellow citizens, both the respectable and the villainous.

Of a sudden, there came a shout of ‘Stop thief!’ from farther along Bladder Street. That set off the hubbub of the hue-and-cry. Neighbours hastened onto the street, sounding horns, clattering spoons on pots and pans, adding to the din. It meant Adam and I were obliged to join the chase, pursuing the miscreant, whoever he might be. Adam sprinted ahead, fleet of foot, with Gawain running at full speed, thinking this a fine game. They turned up Noble Street, betwixt the precinct of St Martin-le-Grand and the Goldsmiths’ Hall, disappearing from my sight, along with the crowd of others who ran, hoping to apprehend the villain.

Never much of a runner myself, I soon lagged behind, keeping company with a breathless old man and a woman encumbered with a sleeping infant on her shoulder and armed with a hefty ladle. We would ne’er catch the most sluggardly criminal but the law demanded we make the effort, or else be fined for aiding and abetting the same. My hip was hindering my progress, slow as it was, and by the time we reached St Vedast’s Church at the lower end of Noble Street, I had to pause to ease my protesting bones. The old man stopped beside me to catch his breath; the woman too.

It was then that I glanced up the alleyway beside the church. A pile of rubbish half-blocked the narrow passage. All was filth and grime and stank of stale piss. Yet there was just light sufficient to see a flash of red: a good shoe, I realised, protruding from behind the unsavoury heap of detritus.

I pointed it out to the old man, then put my finger to my lips.

The old man nodded his understanding. He and I crept forth, into the alley. Like so many such passages around the city, this one seemed to end in a blank wall beyond the rubbish. There would be no escape for the vermilion-shod thief – if it was he. I stepped around a broken, handle-less bucket and then a collection of rusted metal odds and ends so as not to alert our quarry. When we drew within a yard or two, we both dashed forward, shouting ‘Hold! Hold, villain!’

A middle-aged fellow leaped from his place of concealment and attempted to push us aside. I shoved him in one direction and the old man tripped him. As the culprit staggered back along the alley, into Noble Street, the woman with the infant awaited him. Her skilful use of the ladle without rousing the child was remarkable. She brought it down upon his head, then whacked him across his middle. He went sprawling in the dirt. The clang of metal as he hit the ground revealed his ill-gotten gains, hidden ’neath his jerkin. A gilded candlestick rolled aside, its partner lay sorely dented – mayhap by the ladle blow – beside the fallen fellow. We had caught our thief.

We dragged him to his feet and shook him awake, marching him back to Bladder Street. I had the stolen candlesticks tucked under my arm. The rascal began complaining and attempted to pull free as his senses rallied but the woman threatened him with the ladle and he came quietly, resigned to his fate.

The householder he had robbed greeted us as heroes, the more so when I returned the candlesticks, though he sorrowed at the damage done. We said naught concerning the ladle as the possible cause of the dents.

‘Ale! Ale for all!’ the householder cried as those who had spent their strength in the hue-and-cry began to trickle back, to report that the thief had got clean away. Most seemed delighted that we had apprehended the culprit but a few were annoyed to have gone to so much effort for no purpose. Others – including Adam – were disappointed to have missed out on the moment of capture.

‘There was naught exciting about it, cousin,’ I assured him.

‘Did he put up much of a fight?’ someone else asked.

I was about to tell him ‘nay’ but the old man – Todd by name, as I learned – made answer for me.

‘I’ll say. The devil fought us like… like a devil. Kicking and flailing and yelling filthy words at me, young Seb here, oh, and Alice… her with the babe-in-arms. So we pummelled him and took him by force, didn’t we Seb? He was lashing out, all to no avail. We was too much for him, wasn’t we?’

The event grew in the telling, Todd elaborating and inventing new details to each new listener who asked. He and I became more heroic in our actions as the evening wore on; the woman, Alice, the true heroine with her ladle, became relegated to the role of a mere on-looker. By the time the City Bailiff, my friend Thaddeus Turner, arrived to take the thief into custody, Todd’s tale had become one of knights errant upon some holy quest. He told Thaddeus how we had wrestled the sword-wielding scoundrel of unsurpassed strength to the ground, despite his casting of evil charms upon us, taking many a cut and buffet in exchange – no matter that we bore not a solitary mark from our encounter.

I shook my head behind Todd’s back, such that Thaddeus should see me.

‘I shall make a true report on the morrow,’ I mouthed to him, not wishing to spoil Todd’s hour of glory.

Praise for The Colour of Evil

“Toni Mount is simply brilliant. If you love CJ Sansom’s Matthew Shardlake – and I do – you will love Toni’s Sebastian Foxley. From learning how a 15th century scrivener created illuminated manuscripts to venturing within the dank tunnels beneath the Tower of London, Toni is an artist who completely immerses the reader in another time and place and always leaves one eager for the next book.”

“Leave it to Seb to unravel another international spiderweb of intrigue, betrayal, murder, and deceit. Our flawed, loveable hero has done it again. And at the end of it all, his future is looking brighter than ever. I cannot wait to find out what happens to him next!”

“A beautifully crafted mystery that brings the dark, dangerous streets of medieval London to life. Toni Mount is a magician with words, weaving a captivating story in wonderful prose. The Colour of Evil is, to put it simply, a pleasure to read.”

Kathryn Warner, medieval historian and author of numerous books about the fourteenth century, including biographies of Edward II and Isabella of France:

“The ninth instalment of Toni Mount’s popular Seb Foxley series is sure to delight Seb’s many fans. Mount puts her deep knowledge of late medieval England to good use once again, and takes us on another exciting adventure, this time with Seb’s older brother Jude, returned from Italy, in tow. Mount’s detailed world-building, as always, brings fifteenth-century London to life.”

The Colour of Evil is available to read on Kindle Unlimited.

Amazon IT Barnes and Noble   Waterstones

Toni Mount earned her Master’s Degree by completing original research into a unique 15th-century medical manuscript. She is the author of several successful non-fiction books including the number one bestseller, Everyday Life in Medieval England, which reflects her detailed knowledge in the lives of ordinary people in the Middle Ages. Toni’s enthusiastic understanding of the period allows her to create accurate, atmospheric settings and realistic characters for her Sebastian Foxley medieval murder mysteries. Toni’s first career was as a scientist and this brings an extra dimension to her novels. It also led to her new biography of Sir Isaac Newton. She writes regularly for both The Richard III Society and The Tudor Society and is a major contributor of online courses to MedievalCourses.com. As well as writing, Toni teaches history to adults, coordinates a creative writing group and is a member of the Crime Writers’ Association.

Don’t forget to check out the other stops on The Colour of Evil blog tour.